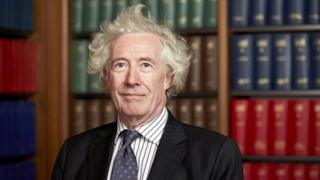 “Shouting and snarling” is not the way to get judges to accept curbs to their powers, a former top judge has warned.

Lord Sumption said the judiciary was likely to accept “reasonable” measures to address government concerns they are meddling in politics.

But he said the government would be mistaken if it thought “abuse” was the way to “get things done”.

Prime Minister Boris Johnson has ordered a review into the relationship between government and the courts.

Later this year, the government will launch a wide-ranging Constitution, Democracy and Rights Commission to take an “in depth” look at the issue. There will also be a separate Royal Commission on the criminal justice process.

The 2019 Conservative manifesto said: “We will ensure that judicial review is available to protect the rights of the individuals against an overbearing state, while ensuring that it is not abused to conduct politics by another means or to create needless delays.”

The government has so far released few details about how the commission will work and how far it wants to go in limiting the power of judges to overturn government decisions.

The commission will be overseen by Cabinet Office minister Michael Gove, working alongside Justice Secretary Robert Buckland and Attorney General Suella Braverman. Lord Sumption is reportedly being tipped by officials to be its chairman.

Ministers believe questions need to be asked to “clarify what it is a judicial review is for”, senior government sources say.

Some ministers have argued that judicial reviews should not be used as a substitute for the work of Parliament.

But they have said any reforms will not be “revenge” for controversial decisions over Brexit – instead saying it will be about making the system better.

In 2015, he argued on his personal blog that “major reform” was needed but it was an “extremely fraught” and complex issue, and entangled with Human Rights law and how the civil service “uses all this to enmesh ministers in management chaos to stop things they don’t like”.

What are judicial reviews?