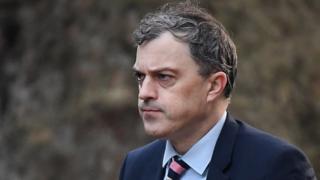 Former secretary of state Julian Smith has said he hopes NI politicians focus on governing for the people, not on issues around the future of the border.

He was speaking during an interview for Radio Ulster’s Talkback programme.

Mr Smith was secretary of state for 204 days, helping to restore devolution in January after a three-year impasse.

He was replaced by Brandon Lewis just five weeks later, but told Talkback he would continue to help Northern Ireland any way he could.

Mr Smith said there were some “extremely talented” assembly members in Northern Ireland.

“I think the biggest message and the biggest thing that I hope will happen is that, over and above the constitutional debates, in the back of every politician’s mind is that they stood on the sidelines for three years and didn’t lead despite being paid and service the interests of the people of Northern Ireland,” he said.

“I think if all parties focus on governing now – yes have a debate on constitutional issues and obviously there are big topics there – but there’s a lot that can be done on the north-south bodies, on climate change, on infrastructure.”

He added: “I was really struck when we did the Stormont deal, people were literally coming up to me in the street and just thanking me for getting it back up and running.

“That was because, not that they didn’t have views on the constitution, but at the moment the focus needs to be on getting stuff done, whether it’s education, healthcare, whatever.”

‘Far too many beers’

Mr Smith said he was “delighted and over the moon” when the parties agreed to return to Stormont and said the importance of devolution had been shown by the way the executive had dealt with the coronavirus pandemic.

“If we’d gone in to either no deal [Brexit] last year without some form of governance or this pandemic without a government we would have had major issues,” he said.

“So I think the biggest thing is to applaud all those political leaders for getting through that period.”

Mr Smith said the day he was appointed Northern Ireland secretary he’d had “far too many beers” after going to the pub when he lost his job as Conservative chief whip, but that he was honoured to take the job.

He said getting the executive back up and running was the first priority.