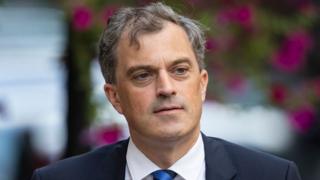 Julian Smith has been sacked as Northern Ireland Secretary as part of the prime minister’s cabinet reshuffle.

He took over from Karen Bradley who was sacked by the new prime minister Boris Johnson after 562 days as NI secretary.

Mr Smith oversaw a talks process that led to the Northern Ireland parties agreeing a deal to restore a power-sharing government at Stormont last month.

He was also praised for his role in helping legislation to provide compensation to historical abuse victims pass through Parliament. 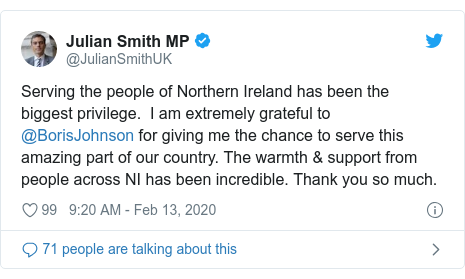 He said serving the people of Northern Ireland “has been the biggest privilege”.

He added: “The warmth and support from people across NI has been incredible. Thank you so much.”

So it’s farewell Julian Smith and we’ll be getting a fourth NI Secretary in under four years.

This will be a hugely unpopular decision in both Belfast and Dublin, and will leave some wondering why the prime minister would sack a secretary of state who actually managed to do what seemed impossible – get devolution restored.

But remember, Julian Smith and Boris Johnson had never seen eye to eye – on Brexit and other NI matters.

Mr Smith had also been known for fighting his corner in cabinet, rather than being quietly loyal.

In his short-lived time at Stormont (just seven months), he not only stopped the ship from sinking but also helped it to chart a new course.

Many will feel his replacement has a lot to live up to.

Irish Foreign Minister and Tánaiste (deputy first minister) Simon Coveney said Mr Smith had been “such an effective secretary of state for NI at a time of real challenge and risk”.

He added: “Without your leadership I don’t believe NI would have a government today.

“Thank you Julian Smith for your trust, friendship and courage; the UK and Ireland can look to the future with more confidence because of it.”

DUP leader Arlene Foster said she had spoken to Mr Smith on Thursday morning to thank him for his help in getting devolution restored.

“We may not have always agreed (we did sometimes) but his dedication to the role was incredible,” she said.

“Best wishes to him and his family. Always welcome in Fermanagh.”

In a tweet, SDLP leader Colum Eastwood said that “sacking the most successful secretary of state in a decade shows Johnson’s dangerous indifference to us”.