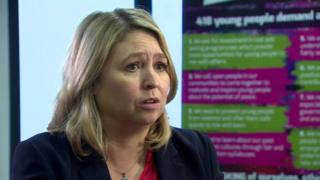 The Northern Ireland secretary has said she believes a no-deal Brexit could put in jeopardy some of the UK’s current constitutional arrangements.

Karen Bradley said there could be “feelings of unrest” among those who did not want the to leave the EU.

She would not comment on reports that she told cabinet a no-deal scenario would make the prospect of a referendum on a united Ireland much more likely.

She told BBC News NI she would not comment on anything that she may, or may not, have said at cabinet, adding that she was well aware of her obligations under the Belfast Agreement in regard to assessing whether or not a border poll should be held.

“I’m sure it will create feeling of unrest with people in all parts of the United Kingdom who didn’t want to see us leave the European Union.”

Asked to respond to the DUP’s view that the Northern Ireland backstop contained in the Withdrawal Agreement poses a greater threat to the integrity of the UK than a no-deal Brexit, Mrs Bradley said that she wanted to make sure that all the concerns that have been expressed about the backstop are assuaged.

The secretary of state said the government had made clear its unilateral commitments to Northern Ireland in a paper published earlier this week, but that ultimately there is a political judgement to be made.