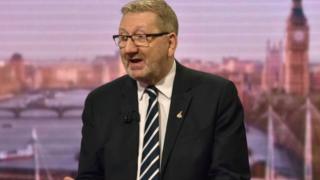 Jeremy Corbyn’s critics used the issue of anti-Semitism in the Labour Party to undermine him, a union boss has said.

Labour’s response to alleged anti-Semitism among its members has been under investigation by the Equality and Human Rights Commission since last May.

Meanwhile, his union has backed Rebecca Long-Bailey for Labour leadership.

But Mr McCluskey said it was “unfair” to describe her as the “continuity Corbyn” candidate as she will have different priorities.

Speaking to the BBC’s Andrew Marr Show, Mr McCluskey said: “I’m absolutely convinced that there were those individuals who opposed Jeremy Corbyn’s election right from the beginning, used the anti-Semitism issue – which I think is quite despicable that they did this on such an important subject – to undermine Corbyn, there’s no doubt about that.”

But he said that the party had “never handled the anti-Semitism issue correctly”, adding: “We should have done things quicker.”

The Equality and Human Rights Commission is assessing whether Labour has “unlawfully discriminated against, harassed or victimised people because they are Jewish”.

Labour has been plagued by accusations of anti-Semitism since mid-2016 – and the leadership has been accused by some of its own MPs of tolerating a culture of anti-Jewish prejudice.

Leader Jeremy Corbyn has insisted he is getting to grips with the issue and the party’s internal disciplinary procedures have been beefed up.