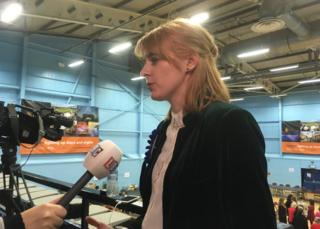 Labour is calling for an urgent investigation into a Tory MP after she was pictured with two far right activists.

The images of Dehenna Davison were posted on Facebook after a Brexit-themed party on 31 January.

The MP told the Huff Post the party was a public event and she “in no way whatsoever” condoned their views.

The BBC contacted her office, but was told Ms Davison would not be making any further comment.

Labour’s shadow equalities minister, Dawn Butler, said the incident was “another example of the serious level of complacency towards the far right by the Tory Party”.

She added: “The police have warned that the far right are the fastest growing terrorist threat in the UK, yet we see the Tories proudly fraternising with open racists and neo-Nazis. This must be urgently investigated.”

The party took place at The Merry Monk pub in Ms Davison’s constituency of Bishop Auckland on the day the UK left the EU.

Campaign group Hope Not Hate claimed one of the men she was pictured with had previously been an active member of the local Conservative Party.

They also said he had organised protests outside the office of the area’s former Labour MP, Helen Goodman, with members of the English Defence League and other far right groups.

Local Labour activists said they had flagged his affiliations to Ms Davison in a tweet in 2018 – more than a year before the party took place.

Hope Not Hate said the other man Ms Davison was pictured with, who attended the protests, had p