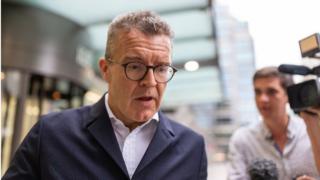 It follows comments by shadow chancellor John McDonnell that a future Labour government would not block another vote.

Mr Watson said another referendum “is not the answer” to Tory austerity and Brexit.

He added that he fully endorsed the position of Scottish Labour leader Richard Leonard.

His intervention comes after Mr McDonnell told an audience in Edinburgh last week that any decision about holding an independence vote would be up to the Scottish Parliament.

And it follows a warning by ex-Labour prime minister Gordon Brown, who said unionism “appears to be sleepwalking into oblivion”.

In a video released on Sunday, Mr Watson said: “We can see the mess caused by the prospect of the UK leaving the four decade-long union with Europe – imagine how much more disruptive it would be to break our three centuries-long Union of Scotland within the UK.”

He pointed out that the party’s Scottish leader Richard Leonard had already made it “absolutely clear” that there was no case for a second independence referendum.

Mr Watson added: “As we said in our 2017 manifesto, Labour opposes another referendu