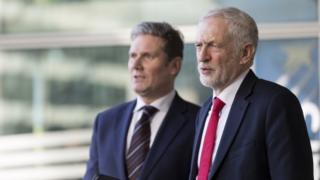 With voting under way in the contest to replace him, what is Labour’s outgoing leader hoping to achieve in his last few weeks in the job?

Jeremy Corbyn made it clear that he wouldn’t be endorsing any of the candidates seeking to succeed him.

But there have been concerns in recent days that the Rebecca Long-Bailey campaign – while officially backed by left-wing grassroots group Momentum – is actually lacking momentum.

Mrs Long-Bailey has been keen to distance herself from the “continuity Corbyn” tag, preferring to style herself as a “continuity socialist”.

But a closer association with the current leader might be necessary to rally support – with a recent YouGov poll of party members suggesting she is a long way behind Sir Keir Starmer.

Despite appearing in a Twitter video with her, Mr Corbyn was careful not to say specifically that he backed Long-Bailey’s campaign but instead to offer his “absolute support”, in the event she becomes leader, for her stance on climate change.

But the optics of the video – as they chat chummily about policy – amount to a de facto endorsement.

And there is a very active debate among her supporters about just how far she pushes her “dividing lines” – on Brexit, on selection of MPs – with Sir Keir in the closing stages of the contest.

Some of those close to Mr Corbyn fear his political legacy is looking shaky and are keen to shore up Mrs Long-Bailey’s support to ensure – at the very least – she has a prominent frontbench role.

But how worried should he be about that legacy?

That YouGov poll suggested that even if Mr Corbyn himself were a candidate in this party election, he would get 28% of members’ first-preference votes, while Sir Keir would garner 40%.

The unknown question is just how far and how quickly Sir Keir would depart from the Corbyn agenda if he wins.

Some on the left – such as Ms Parker – have been reassured by Sir Keir’s “10 pledges”, which include key commitments from the Corbyn era, such as nationalising rail, mail and water and repealing anti-union laws.