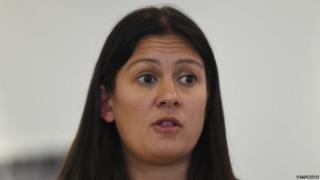 Labour leadership candidates are seeking the backing of unions and local parties as the next stage of the contest gets under way.

The five candidates have to get the support of 5% of local parties or at least three affiliates – two of which must be unions – by 14 February to make it on to the final ballot.

The National Union of Mineworkers (NUM) said it would be backing Lisa Nandy.

The general secretary said the Wigan MP could take the party back into power.

Chris Kitchen said she was able to “regain the trust of the voters we’ve lost”.

Other unions, such as Unite and the GMB, have yet to make up their minds.

Jeremy Corbyn’s successor as Labour leader will be announced on 4 April. He is stepping down after Labour’s defeat in December’s general election, its fourth election defeat in a row.

In the first phase of the contest, Sir Keir won the backing of most MPs and MEPs, well ahead of Rebecca Long Bailey, Ms Nandy, Jess Phillips and Emily Thornberry. Clive Lewis pulled out after failing to secure enough support.

The race is now on for the candidates to win enough nominations from constituency parties, trade unions and other bodies affiliated to Labour to stay in the contest.

The NUM said it was backing Ms Nandy because “she represents a coalfield community and has stood with us in our fights for justice and regeneration”.

The union, whose membership has shrunk considerably since its heyday in the 1970s and 1980s, said it was “confident she is the leader who can take Labour back into government once again”.

Several former mining towns which were rock-solid Labour areas for decades backed the Conservatives in the election, with many voters saying they felt disconnected from Labour over Brexit and other issues.

Ms Nandy said successive governments had failed to help such areas build new futures for themselves, with the preponderance of short-time insecure work eroding the social fabric of tight-knit communities.

“Former coalfields and towns are crying out for real change,” she said.

“Some of these areas are part of the famous red wall that fell in the last election. I get it.