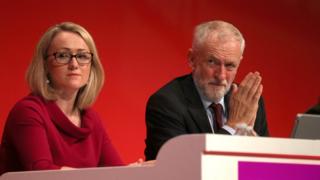 Jeremy Corbyn has appeared in a campaign video for Rebecca Long-Bailey, in an apparent show of support for her bid to replace him as Labour leader.

In the video, posted on Twitter, Mr Corbyn promised he would give the shadow business secretary his “absolute support” if she wins the contest.

He has not appeared in campaign videos for her leadership rivals, Sir Keir Starmer and Lisa Nandy.

Members began voting earlier this week, with the result announced on 4 April.

Mr Corbyn has also appeared in campaign video for shadow justice secretary Richard Burgon, one of five candidates for the deputy leader position.

In the video, he said there was “a lot of merit” in Mr Burgon’s proposal to give party members a vote on whether a future Labour government should take part in military action, in certain circumstances.

Mr Corbyn did not offer an explicit endorsement of either Mrs Long-Bailey or Mr Burgon in his appearances in their respective campaign videos.

He said last month that he would not be revealing which of his potential successors he would be voting for.

Asked in the video which issues she thinks will come up at the next election, Mrs Long-Bailey replied: “I think the next general election will be a climate election.”

She adds that it will be important to make Labour’s plans for a “green industrial revolution” a “central part” of the party’s offer to voters.

Last week Mr Corbyn, who is standing down after the party’s heavy election defeat, said he would consider serving in the shadow cabinet if offered a job by his successor.

Some of those close to Mr Corbyn fear his political legacy is looking shaky and are keen to shore up Mrs Long-Bailey’s support to ensure – at the very least – she has a prominent frontbench role.

But how worried should he be about that legacy?

A YouGov poll suggested that even if Mr Corbyn himself were a candidate in this party election, he would get 28% of members’ first-preference votes, while Sir Keir would garner 40%.

The unknown question is just how far and how quickly Sir Keir would depart from the Corbyn agenda if he wins.

Mrs Long-Bailey has said she would offer him a place in her top team if she is successful, and has previously scored his leadership of the party as “10 out of 10”.