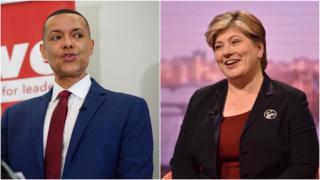 Labour MPs have a few hours left to decide who to back to be their leader ahead of the close of nominations.

But Clive Lewis and Emily Thornberry are struggling to get the necessary support from 22 MPs and MEPs.

Mr Lewis told the BBC he had “faith” that enough colleagues would back him by the 14.30 GMT deadline.

As it stands, Mr Lewis has only four nominations, one of them from himself.

The Norwich South MP told Radio 4’s Today programme Labour had to “transform or die”, saying it was not enough for the party to “change leader, trim policy or have a sharper message” if it did not also overhaul its structures and work better with other progressive forces in British politics.

Jeremy Corbyn’s successor as Labour leader will be announced on 4 April. He is standing down after Labour lost its fourth general election in a row last month.

The deputy leader post is also vacant after Tom Watson stood down from Parliament.

Angela Rayner and Ian Murray have secured enough nominations to get onto the ballot paper, but Richard Burgon, Dawn Butler and Rosena Allin-Khan are still short of the threshold.

In a visit to a school later, Ms Phillips will call for a universal childcare service, based on provision in some Scandinavian countries.

In the Mirror, she said Labour must focus on a few key areas rather than offering a “shopping list” of pledges.

“I will prioritise childcare to support mums, dads, nans and grandads, in the knowledge that their kids and grandkids are in good hands,” she said. “In the years ahead I want people to look back and ask: how did we manage before National Universal Childcare?”

More than 50 Labour MPs have yet to state who they are backing, although Mr Corbyn has said he will not endorse anyone. All the candidates have so far nominated themselves, except Sir Keir and Ms Thornberry.