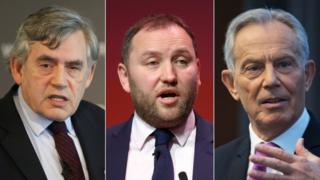 Two former Labour prime ministers have given their backing to Ian Murray to become the party’s next deputy leader.

Both Tony Blair and Gordon Brown are supporting Labour’s only remaining Scottish MP to succeed Tom Watson, after he stepped down in December.

But neither men have endorsed one of the three leadership candidates in the race to replace Jeremy Corbyn.

Ms Rayner – Labour’s shadow education secretary – is seen as the front runner in the race, after securing the most backing from unions, affiliate groups and constituency Labour parties.

Both the new leader and deputy leader be announced at a special conference on 4 April.

In a video message backing Mr Murray for the post, Mr Blair said all the candidates were “wrestling with the inescapable fact that Labour’s lost four times in a row” at general elections, and the party “has to be able to win power in order to put its principles into practice and to bring about real change in the country”.

He said it was a “huge challenge” to face up to, but Mr Murray “gets it”.

“Ian Murray understands that if Labour is to have any hope, it’s got to be able to win in every part and every corner of the United Kingdom,” Mr Blair added.

“It’s got to have a bold vision and programme, but it’s got to be a programme realistic enough to win power.”

Meanwhile, Ms Rayner has spoken about her childhood in an interview with ITV News, describing how she had to care for her mother who had severe depression.

Appearing on camera alongside each other, her mother, Lynn Bowen, described how the MP was her carer when she was “in a very dark place”.