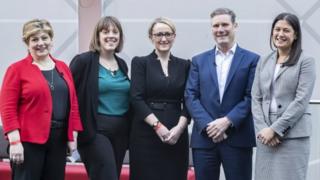 Four Labour leadership candidates will face each other at a hustings later in a bid to gain support from one of the UK’s biggest trade unions.

GMB, which represents workers and has 620,000 members, is due to announce who it is backing after the event.

So far only Sir Keir Starmer has gained the minimum threshold needed to go on to the final ballot.

Birmingham Yardley MP Jess Phillips is the only candidate not attending the hustings because of a prior engagement.

Her spokesperson said she had submitted a written statement and sent apologies.

Ms Phillips, along with shadow business secretary Rebecca Long-Bailey, shadow foreign secretary Emily Thornberry and Wigan MP Lisa Nandy, need to gain more support from unions and affiliate groups to make it through to the next round of the contest.

The candidates have to secure nominations from 5% of constituency Labour parties (CLPs), or at least three affiliate groups – at least two of which are trade unions – representing at least 5% of affiliated members.

Tuesday’s hustings will take place in front of the GMB’s executive.

Arriving at the hustings, the union’s general secretary, Tim Roache, said he was “looking forward to respectful debate and hearing from the candidates”.

Sir Keir said he was “going to give it my best” while Ms Nandy said she was “looking forward to seeing a lot of friends”.

Ms Thornberry was asked whether this was “last chance saloon” for her, but she dismissed the suggestion and insisted it was a “long battle”.

Sir Keir will visit the Union of Shop, Distributive and Allied Workers (Usdaw) in Manchester later, after it announced its support for him on Monday.

The shadow Brexit secretary also has the backing of Unison and affiliate group the Socialist Environment and Resources Association (SERA).

Usdaw’s general secretary, Paddy Lillis, said: “The Labour Party must be led by someone who can persuade voters that they have what it takes to be a prime minister and we are a government-in-waiting.”

Sir Keir said he was “honoured” to have Usdaw’s support, adding: “If I’m elected leader, Labour will stand shoulder to shoulder with the trade union movement as we take on the Tories and rebuild trust with working people.”

Media captionWho decides on the next Labour leader?  » Read More at bbc.co.uk