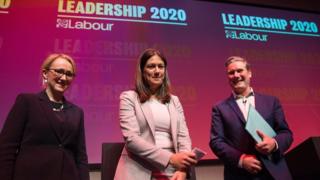 The final contenders for the Labour leadership have answered questions at a hustings in Glasgow, with all three backing more powers being devolved.

Sir Keir Starmer, Rebecca Long-Bailey and Lisa Nandy set out their views on topics including Scottish independence and the constitution.

All three MPs agreed that the party had to win in Scotland to win back power.

However, Ms Long-Bailey was the only one to explicitly state she would agree to a fresh ballot on independence.

She insisted her party must not “fall into the trap” again of working with the Tories to try to keep Scotland in the UK.

At the SEC in Glasgow, the remaining contenders all stressed the importance of Labour winning back support in Scotland as a route back to power across the UK.

Ms Nandy said: “There is no route to government that doesn’t run through Scotland, but the challenge of this is absolutely enormous.”

She added: “We have to start winning in every region and nation of the UK, because we have to show we are a national party of government.”

Similarly Sir Keir said: “We can’t win without Scotland so we have to rebuild in Scotland.”

Ms Long-Bailey – an ally of the departing Jeremy Corbyn – also echoed that, telling activists at the event: “We won’t win a general election without Scotland.”

Asked directly if the Scottish Parliament should have the power to stage a legally-binding vote on independence, Ms Long-Bailey reiterated that while she is opposed to independence she does not think Westminster should block indyref2 against Holyrood’s wishes.

On Saturday she said: “I’m proud to be from the United Kingdom but as a democrat I have to say that if the Scottish Parliament makes the request for a referendum I don’t believe that as a democratic party we could refuse that.”

Her comments came after MSPs at Holyrood voted by 64 to 54 last month in favour of a second independence referendum taking place.