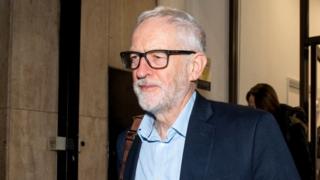 Jeremy Corbyn has said he will not be endorsing a candidate to replace him as Labour leader.

When asked whether he had made up his mind, he said: “I won’t be saying who I’ll be voting for.”

It comes as six leadership hopefuls set out their stall at a meeting of Labour MPs at Westminster.

All emphasised the need for change after its recent election defeat, Lisa Nandy saying the party would “deserve to die” if it didn’t change course.

The MPs need to get the backing of at least 20 of their colleagues to get on to the ballot paper. The winner will be announced on 4 April.

Shadow business secretary Rebecca Long Bailey, the latest candidate to enter the race, has vowed to build on Mr Corbyn’s socialist policy agenda if she is elected leader.

Speaking earlier to ITV News, she said Mr Corbyn deserved full marks for his leadership of the party, describing him as the “most honest, kind, principled politician” she has ever met.

“What we can’t ignore was that Jeremy was savaged from day one by the press.

“We have a role as a party to develop the image of our leader and to put them forward in the most positive way, but we also have a duty to rebut criticism and attacks.”

Mr Corbyn told BBC News that Mrs Long Bailey was a “wonderful colleague”, who had given him “ten out of ten”, but added: “I never mark my own homework.”

The Labour MPs’ leadership hustings was closed to the media, but some of the contenders released the text of the speeches they planned to make.

Shadow Brexit Secretary Sir Keir Starmer planned to tell MPs: “I think we can restore trust in our Labour Party. We have got the talent in this room to do that, if we use it and if we pull together. I do believe we can force a way to victory.”

Backbencher Jess Phillips’s team said she planned to make “a passionate case for the party to elect a different sort of leader”.

“I don’t want to be the leader of the opposition – I want to be prime minister,” she was expected to tell her Labour colleagues.

BBC Political Correspondent Iain Watson was among the reporters listening to the speeches in the corridor outside the meeting room.