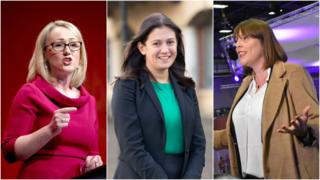 The MPs for Salford and Eccles, Wigan and Birmingham Yardley join Sir Keir Starmer on the ballot paper.

Candidates need 22 Labour MPs or MEPs to nominate them before Monday.

Emily Thornberry and Clive Lewis have also declared they are running, but Barry Gardiner, who was considering joining, has now ruled himself out.

Ms Thornberry – the shadow foreign secretary – has only secured seven nominations so far, while Mr Lewis – a shadow treasury minister – has four.

There is also a contest to become deputy leader after Tom Watson stepped down in December.

The new leader and deputy leader will be announced on 4 April.

Her supporters include shadow chancellor John McDonnell, shadow home secretary Diane Abbott and Labour Party chairman Ian Lavery – who had been considering his own run.

Both Ms Phillips and Ms Nandy have 22 nominations.

Both MPs took to Twitter to thank the people who had nominated them, with Ms Phillips celebrating the amount she had raised through crowdfunding, adding: “It means so much to be powered by people.”

Ms Nandy also tweeted to say she was “proud” to have gained support from MPs “representing different parts of the country and different traditions in our movement”.

However, all three candidates are behind the shadow Brexit secretary Sir Keir, who has secured 63 nominations so far – including from the shado