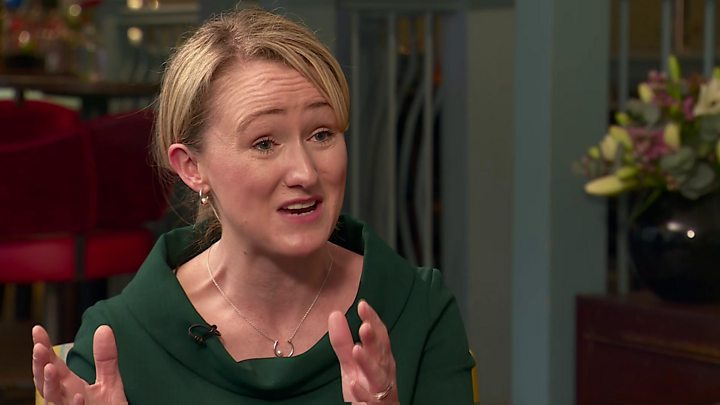 Media captionLabour needs to sell a message of aspiration to voters, says Long-Bailey

Labour had “a great set of policies” at the general election but got its “messaging” wrong, Rebecca Long-Bailey has told the BBC.

“We should have been talking about aspiration,” the Labour leadership contender said, but too often talked about “handouts” instead.

She said she had the ability to sell “a positive vision” and “hope for the future” that wins elections.

The race to succeed Jeremy Corbyn is down to four after Jess Phillips quit.

Shadow Brexit secretary Sir Keir Starmer and Wigan MP Lisa Nandy have made it on the final leadership ballot, after securing the necessary trade union and affiliated group support.

Emily Thornberry and Mrs Long-Bailey have yet to reach the threshold.

Ms Phillips said she would be happy with either Ms Nandy or Sir Keir as leader, but argued that Mrs Long-Bailey would be the wrong choice for Labour at this moment.

Mr Corbyn announced he would be standing down after Labour suffered its worst defeat, in terms of seats, since 1935 in December’s election.

But Mrs Long-Bailey – whose campaign is backed by grassroots organisation Momentum – refused to blame the party’s manifesto, saying she was “proud” of the policies in it.

Labour’s “compromise position” on Brexit “didn’t satisfy our communities and meant that we weren’t trusted,” she told the BBC’s political editor, Laura Kuenssberg.

And, she added: “We didn’t tackle anti-Semitism and we weren’t trusted to deal with that issue within our own party.”

The manifesto policies – which included nationalising utilities and a big increase in tax-funded public spending – were not drawn together into an “overarching narrative” that chimed with the electorate, she said.

“Our messaging really didn’t resonate with voters. We should have been talking about aspiration and how all of the things within our manifesto would improve your life, would improve the outcome for businesses in our areas, but we didn’t say that.

“Quite often we talked about handouts and how we will help people, rather than providing that broad positive vision of the future.”

She said Labour had a history of talking “about how bad the Conservatives are” without “showing that real vision and hope for the future”.

“That’s what wins general elections, showing that real vision and hope for the future. And I know that I can do that and that’s why I’m standing to be the leader of the party.”