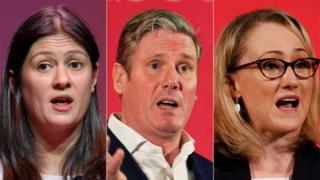 Voting will close on 2 April, with the results announced at a special conference two days later.

Among those taking part will be 114,000 new members who have joined since December’s election, where Labour won its lowest number of seats since 1935.

Members of affiliated trades unions and groups can also vote, as well as around 14,700 “registered supporters” who have paid £25 to take part on a one-off basis.

To qualify for the ballot, candidates needed support from three unions or affiliates representing 5% of the membership, or 33 constituency Labour parties (CLPs).

Sir Keir, the party’s Brexit spokesman, is seen as the front-runner in the contest and has secured the most nominations from unions and affiliates, as well as CLPs.

In an interview with the Observer on Sunday, he pledged that uniting the party after its heavy election defeat would be his “first priority” if elected leader.

“We need to train our focus on Boris Johnson and attack him, not each other,” he told the newspaper.

Speaking at a members’ hustings in Durham on Sunday, all three leadership candidates pledged to offer their rivals shadow cabinet posts if they are successful, and said they would happily serve in the winner’s top team.

Sir Keir did not commit to offering roles to his rivals at a previous event last week.

Writing for the Independent on Sunday, Wigan MP Ms Nandy said the party had previously treated voters concerned about immigration as “irrational or racist”.

She added that the party would need to focus on devolving power around the country, rather than offering policies “devised by a small group of people behind desks in central London”.

Also making her pitch to members before voting opened, Mrs Long-Bailey said the party should turn the next election into a “climate election”.

In an Independent article of her own, the shadow business secretary said green policies could improve infrastructure and boost “well-paid, unionised jobs”.

Meanwhile shadow home secretary Diane Abbott joined shadow chancellor John McDonnell in saying she will stand down from the shadow cabinet once a new leader is in place.