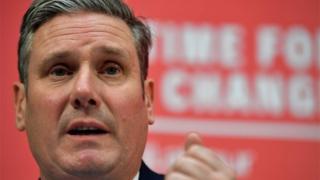 Sir Keir Starmer has told the BBC he is “seriously considering” standing to be the next Labour leader.

The shadow Brexit secretary said Labour has “a mountain to climb” following its general election defeat.

Another potential contender Yvette Cooper said she would “decide over Christmas” about whether to stand.

Meanwhile ex-Prime Minister Tony Blair has accused the Labour leadership of going into the election with a “strategy for defeat”.

“The result has brought shame on us – we let our country down,” he said in speech in central London.

Jeremy Corbyn has said he will stand down as leader “early next year” and the race to replace him could start on 7 January.

Reflecting on Labour’s defeat, Sir Keir – who was calling for another EU referendum – said the party had failed to “knock back” the Conservatives’ “get Brexit done” slogan.

He also attacked the Labour’s manifesto arguing it “had too much in it” adding “we couldn’t see the wood for the trees”.

Looking to the party’s future, he said: “What Corbyn bought to the Labour party was a change of emphasis – radicalism that really matters – we need to build on that, not oversteer and go back to a bygone age.”

Asked whether he considered himself to be a Corbynite, Sir Keir said: “I don’t need someone else’s name tattooed on my head to make decisions.”

Sir Keir Starmer’s message is a fairly nuanced one.

He is not criticising Jeremy Corybn or Momentum.

He says he doesn’t think the party should oversteer back to the centre ground.

I suspect that will disappoint some MPs who think the plight of the party is much greater than he is suggesting.

The difficulty is, to get a chance in this race you have to get the backing of the membership who are overwhelmingly pro-Corbyn.

You have to strike a careful message. You cannot just go out there as Tony Blair has done.

Labour’s defeats in the North of England constituencies has led some to say the next leader should not come from London.

However Sir Keir said the Labour leader needed to “be able to talk to everyone” in the UK.

The former director of public prosecutions also insisted that “my background isn’t what people think it is”, adding that he had “never been in any other workplace than a factory” before he went to university.