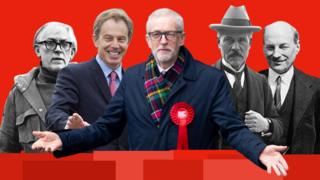 The new Labour leader faces a huge task. The party’s performance at the 2019 General Election was its worst since 1935.

Battered over Brexit, losing support in previous strongholds, and led by Jeremy Corbyn whose personal ratings were among the lowest ever recorded, Labour took a hammering.

Can the new leader turn around the party’s prospects?

Here’s what 100 years of voting tells us about the scale of the task ahead.

Labour had its first prime minister in 1924

More than 700 million votes have been cast in UK general elections since 1918, some 300 million of them for Labour.

The party produced its first prime minister, Ramsay MacDonald, at the head of a minority government in 1924.

The 2019 general election was a disaster for Labour, leaving Jeremy Corbyn’s party with 202 out of 650 Commons seats.

Labour’s new leader will have fewer colleagues in the House of Commons than any Labour leader has had for 84 years.

The party lost heavily, even in areas where working class supporters had kept Labour afloat for generations.

Former mining communities in north-east England and Wales turned away. The party lost seats in every English region except London.

In Scotland, Labour, with just one seat out of 59, have been all but wiped out.

Labour has suffered heavy defeats before

Labour’s poor performance followed a damaging split which resulted in the formation of the Social Democratic Party (SDP).

As in 2019, Labour faced sharp criticism over a manifesto widely regarded as too radical. Critics called it “the longest suicide note in history”.

Mr Foot also faced Conservative Prime Minister Margaret Thatcher, who was riding a crest of popularity, buoyed by victory in the Falklands War against Argentina.

Labour has made some big come-backs

The outlook for the new leader may look bleak, but Labour has recovered from heavy defeats before.