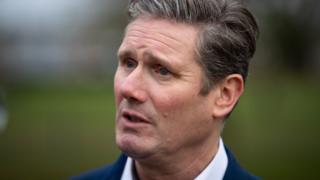 Sir Keir Starmer has won the backing of the UK’s largest trade union, Unison, to become the next Labour leader.

Unison, which has 1.3 million members, said the shadow Brexit secretary was best placed of the candidates to unite the party and regain public trust.

Unite, Labour’s largest financial backer, will decide later this month who to back in the contest.

Sir Keir has also become the first to secure enough nominations from MPs and MEPs to get on the ballot paper.

By Wednesday morning, the Holborn and St Pancras MP had secured the backing of 23 colleagues – passing the minimum of 22 required.

Shadow business secretary Rebecca Long Bailey is his closest competitor, followed by Jess Phillips. Nominations close on 13 January and the winner will be announced on 4 April.

Unison’s endorsement is a major boost for Sir Keir’s campaign. Announcing its decision, the union said it believed the former director of public prosecutions was capable of taking Labour back into government.

“We believe – if elected by the membership – Keir Starmer would be a leader to bring the party together and win back the trust of the thousands of voters who deserted Labour last month,” he said.

“Keir has a clear vision to get Labour back to the winning ways of the past. He is best placed to take on Boris Johnson, hold his government to account and ensure Labour can return to power.”

The union, which represents workers across the NHS, schools and other public services, backed Jeremy Corbyn in 2015 and 2016.

Sir Keir said he was “honoured” to receive the union’s backing and, if he was elected, he would stand “side-by-side” with the trade union movement to take the fight to the Conservatives.

Mrs Long Bailey’s backers include deputy candidate Angela Rayner, while Birmingham Yardley MP Jess Phillips has the support of, among others, Wes Streeting – an outspoken critic of Mr Corbyn over his handling of anti-Semitism allegations in the party.