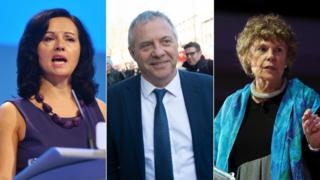 Labour MPs could face disciplinary action for rebelling against their party over Brexit.

Seven Labour MPs voted with the government on Tuesday for an amendment calling for “alternative arrangements” to the backstop part of the PM’s deal.

Fourteen Labour MPs also voted against a cross-party amendment to delay Brexit, which had the party’s backing.

Labour leader Jeremy Corbyn said he was “disappointed” with the members who voted with the government.

And he said the party would be “having discussions” with them in the coming days.

The BBC’s political correspondent Iain Watson said other Labour MPs were calling on Mr Corbyn to take action against the rebels.

MPs voted on a string of amendments on Tuesday to alter the direction of Theresa May’s Brexit deal – after her original plan was voted down by Parliament earlier in January.

The “Brady” amendment – tabled by Tory MP Sir Graham Brady – sought to make changes to the backstop, which is the insurance policy aiming to prevent checks on people and goods returning to the border between Ireland and Northern Ireland after Brexit.

The backstop was one of the main reasons Mrs May’s deal was rejected, as critics said it would give a different status for Northern Ireland – threatening the existence of the UK – and they feared the arrangement could become permanent.

And the amendment won the support of the Commons by a majority of 16 votes.