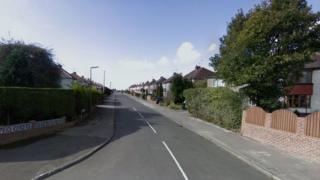 Image copyright Google Image caption The elderly campaigner was canvassing with a walking stick on Parkstone Crescent in the village of Hellaby, Rotherham

A 72-year-old party election campaigner has been attacked and injured while going house-to-house.

The man, who uses a walking stick, was initially taken to hospital with a suspected broken jaw, South Yorkshire Police said.

Sophie Wilson, Labour’s candidate in Rother Valley, said it was “a completely unacceptable and vicious act”.

A man has been arrested on suspicion of causing grievous bodily harm.

The 51-year-old remained in custody, the force said.

Officers said they were called out just after 16:00 GMT on Sunday to Parkstone Crescent, Hellaby, Rotherham.

Posting on Facebook shortly afterwards, Ms Wilson said: “I am sad to report that one of our members… was assaulted while out campaigning today.”

She said he was “doing well and in good spirits” when she visited him in hospital.

“He will not let this get him down,” she said.

The campaigner was understood to be “back out knocking on doors” on Monday, a Labour Party spokesman said.

The other candidates standing in Rother Valley are: