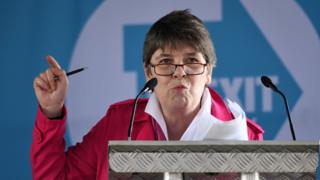 Labour has called on Boris Johnson to block a peerage for an ex-MEP who has refused to apologise for comments about an IRA attack in 1993.

She was a member of the Revolutionary Communist Party (RCP) which defended the bombing in Warrington.

No 10 said Ms Fox had “addressed her historic comments about the Troubles” and was not a Conservative appointment.

Tim Parry, 12, and Johnathan Ball, three, were killed in the IRA attack on the Cheshire town on 20 March 1993 which left 56 others injured.

In a newsletter after the bombing, the RCP said it defended “the right of the Irish people to take whatever measures necessary in their struggle for freedom”.

Ms Fox, who ceased to be a Member of the European Parliament after the UK’s EU exit in January, has been criticised for not condemning for the RCP statement.

The Brexit Party’s candidate for Warrington quit over the matter ahead of the European elections in May 2019 when Ms Fox won her North West England seat.

In a statement at the time Ms Fox said “I do not condone the use of violence.”

When she was asked ahead of the election if she still thought the IRA had the right to carry out the attack, she replied: “I think there was a war going on at that time.”

“You have to accept that I think that is long since gone.”

Ms Fox was nominated for a non-affiliated peerage by the House of Lords Appointments Commission as part of the recent Dissolution Honours list.

Appointments to the upper chamber are officially made by the Queen on the recommendation of the prime minister.

After her nomination to the Lords was announced, Ms Fox told the Mirror: “Contrary to what has been reported elsewhere, I do not support or defend the IRA’s killing of two young boys in Warrington in 1993.”

“I have not mentioned the horrific times of over 23 (now 27) years ago since then and do not believe there is any justification for violence in Ireland today.”

“The killing of Johnathan Ball and Tim Parry was a terrible tragedy.

“The 1994 IRA ceasefire and the 1998 Good Friday Agreement drew a line under the conflict. It’s surely time to move on.”