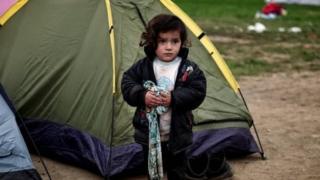 Labour is urging Conservative MPs to take “a moral stance” and support its proposal to amend the Brexit bill to give more protection to child refugees.

The amendment calls on the government to guarantee the right of unaccompanied child refugees to be reunited with family living in the UK after Brexit.

A previous version of the Brexit bill included such a pledge, but it was removed after the Tories’ election win.

The government said it had “a proud record of helping vulnerable children.”

MPs could vote on the Labour amendment on Wednesday when they return for a second day of scrutiny of the Brexit bill – or EU Withdrawal Agreement Bill as it is officially known.

That’s the legislation implementing Boris Johnson’s Brexit deal and it must be passed by both the Commons and Lords if the UK is to leave the EU on 31 January – the current deadline.

Labour’s Lord Dubs – who came to the UK as a child to escape the Nazis – had campaigned for the commitment to be included in the bill.

He called the government’s decision to take it out “appalling and deeply distressing”.

What has Labour said?

In the letter they write: “We know that there are many Conservative MPs, including some sat around the cabinet table, who know that this decision was wrong.

“Boris Johnson may have won a majority in Parliament, but he did not win the moral argument to absolve himself of responsibility to some of the most vulnerable people in the world.

“With the numbers in Parliament being what they are, it’s up to you – Conservative MPs – to take a moral stance and force the government to rethink its approach on this vital issue.

“You have the power to right this wrong. This is your test – and we would urge you to hold them to account over this disgraceful decision.”

The Liberal Democrats have also called for the government to rethink what they call an “inhumane” position.

How has the government responded?

A government spokesman defended the UK’s record on child refugees, saying it had done “more than the vast majority of EU countries to help unaccompanied minors”.

“Protecting vulnerable children will remain our priority after Brexit and this new clause reaffirms our commitment while clarifying the role of Parliament and government in negotiations.”