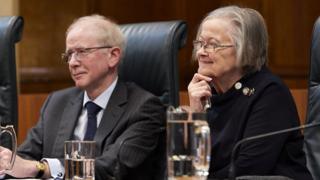 She advised against adopting a US-style approach “whether in powers or in process of appointment”.

The Conservatives have pledged to review the “relationship between the government, Parliament and the courts”.

Lady Hale gained public notoriety when she ruled on the prorogation of Parliament wearing a big spider brooch.

She will officially retire from her post when she turns 75 next month – the mandatory retirement age for judges appointed before 1995.

It comes as Downing Street said the government’s Brexit bill will enable more British judges to depart from previous rulings of the EU’s top court.

In her final speech in the role, Lady Hale said: “We (Supreme Court justices) do not know one another’s political opinions – although occasionally we may have a good guess – and long may that remain so.

“Judges have not been appointed for party political reasons in this country since at least the Second World War.

“We do not want to turn into the Supreme Court of the United States – whether in powers or in process of appointment.”

UK Supreme Court judges are appointed on legal experts’ advice, whereas in the US the President can nominate them. 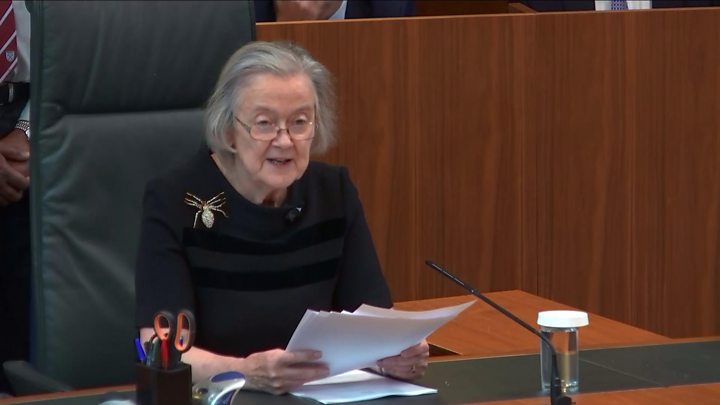 In September, the Supreme Court ruled that Boris Johnson’s decision to suspend Parliament for five weeks was unlawful.

Lady Hale delivered that ruling, saying the unanimous decision of the 11 justices meant Parliament had effectively not been prorogued, triggering the resumption of Parliamentary business the following day.

In response, attorney-general Geoffrey Cox QC told MPs in the Commons there could come a time for “parliamentary scrutiny” of senior judicial appointments.

However, just days later he said that US-style hearings “would be a regrettable step for us in our constitutional arrangements.”

During the election, however, the Conservative Party pledged to review the UK’s unwritten constitution.

In its manifesto, it said: “After Brexit we also need to look at the broader aspects of our constitution: the relationship between the government, Parliament and the courts; the functioning of the royal prerogative; the role of the House of Lords;