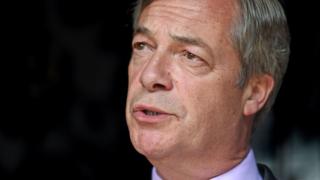 Nigel Farage received £450,000 from the founder of pro-Brexit group Leave.EU in the year after the Brexit referendum.

Items paid for by Arron Banks included Mr Farage’s London home, his car and trips to the US to meet Donald Trump.

A spokesman for Mr Banks confirmed the amount and what it had been used for, saying it was an “honour to help”.

Asked about the funding following an investigation by Channel 4 News, Mr Farage – who now leads the Brexit party – said it was a private matter.

Speaking at the launch of the Brexit party campaign in Scotland, Mr Farage said he did not declare the it to the European Parliament because he was about to leave politics and had been seeking a new life in the US.

He added his actions had been non-political.

Mr Farage has been a member of the European Parliament since 1999.

He led UKIP in the run-up to the 2016 EU referendum, campaigning alongside Leave.EU, of which Mr Banks was a major financier.

Mr Farage stepped down as leader later the same year, but remained as an MEP.

In March this year, he launched the Brexit Party and is now leading it to fight the European elections.

When campaigning in Dudley, West Midlands, Mr Farage was asked if he had received £450,000 from Mr Banks and said “unfortunately not”, adding that if he had, “it would be lovely”.

But in a statement, Mr Banks said Mr Farage “would not have had a clue how much things would have cost”.

The Leave.EU founder said he had “willingly helped Farag