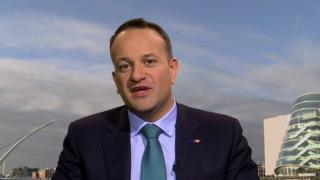 Leo Varadkar has warned difficulties in forming a government in the Republic of Ireland could directly impact Britain’s post-Brexit trade deal.

A general election is due to take place in the Republic on 8 February.

Speaking on the BBC’s Andrew Marr Show, the Irish prime minister said it was “all to play for” after several polls put the major parties “neck and neck”.

He added that he called the election so a government could be in place before the European Council meeting in March.

At the meeting, Fine Gael’s Phil Hogan will be leading the trade negotiations as the EU’s commissioner for trade.

“I know that’s something the Irish people will reflect on when they go to the polls at the weekend – the need to have a stable government – because that’s essential to our future in so many ways,” the taoiseach said.

The Fine Gael leader reiterated his party’s position that they would rule out a coalition with Sinn Féin. He said the party was “soft on crime and high on tax” which would be “enormously dangerous for the Irish economy”.

Mr Varadkar said any future deals between the EU and the UK must “start off on better footing than maybe was the case after the referendum”.

His warning comes as it is revealed that Boris Johnson is to say he will not accept alignment with EU rules when Britain negotiates a trade deal with Brussels.