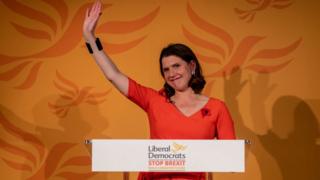 The Liberal Democrats’ campaign during December’s general election has been likened to a “high-speed car crash” by an internal inquiry.

The party returned just 11 MPs, one down on the 2017 tally, and lost its then-leader Jo Swinson.

The Lib Dems initially pitched for votes on the message that Ms Swinson could become the next PM, but the study found voters saw this as “unrealistic”.

The inquiry also suggested sexism and misogyny featured against the campaign.

December’s election resulted in the Conservative Party returning to the House of Commons with a majority of 80 – the party’s largest since 1987.

Meanwhile, Labour was swept aside by the Conservatives in its traditional heartlands in the Midlands and north-east England, and lost six seats in Wales.

The Liberal Democrats had gone into the election with 20 MPs after defections from other parties and after winning 12 seats in 2017.

One section of its internal inquiry into the election was headlined: “The election: a high-speed car crash.”

The report found the plan to stop Brexit without a second referendum was used against the Lib Dems and called “undemocratic” by other parties.

It said previously “net-positive ratings” fell for Ms Swinson during the campaign.

“There was clearly a lot of misogyny and sexism at play, and Jo’s appeal to women also fell significantly during the election,” the report said.

“Even beyond the chaos and uncertainty which came into play in 2019, the Liberal Democrats had not translated their beliefs into a c