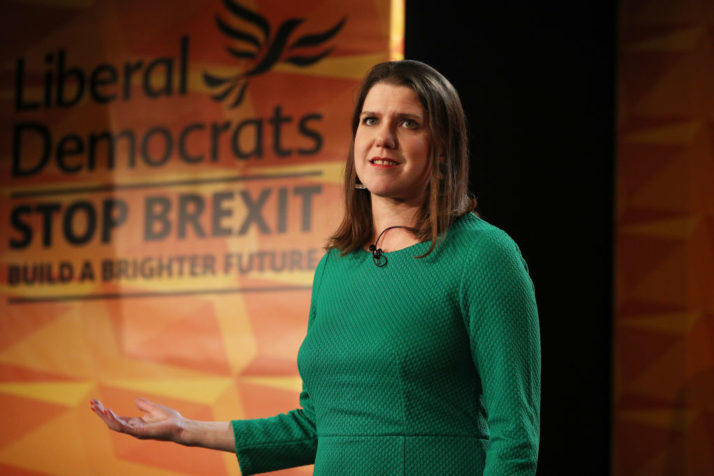 The Lib Dems are unlikely to win the election — but they could be kingmakers.

LONDON — Jo Swinson unveiled the Liberal Democrat manifesto on Wednesday ahead of the U.K.’s December general election. While the party is highly unlikely to win power, it could play a crucial role as kingmaker if one of the two larger parties fails to secure an outright majority.

Here is the list of policies the Lib Dems will be bartering with if they hold the balance of power after December 12.

The Lib Dems have pledged to stop Brexit on Day One if Swinson wins the keys to Downing Street. She told ITV on Tuesday she would write a letter — or maybe even send an email — to Brussels to halt the process of exiting the bloc. If the Lib Dems fail to win the election, the party will still campaign for a fresh Brexit referendum.

“In other circumstances, we will continue to fight for a people’s vote with the option to stay in the EU, and in that vote we would passionately campaign to keep the U.K. in the EU,” the manifesto explains.

The party says remaining in the bloc will deliver a £50 billion “Remain bonus” over five years, which can be used for public services and reducing inequality. The assumption is that the economy will end up 0.4 percent higher on average each year compared with if the Brexit deal negotiated by Boris Johnson is delivered.