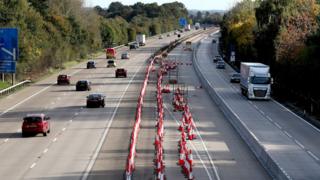 A motorway is to close at night for more than two weeks to remove barriers installed in case of a no-deal Brexit.

The same stretch of the London-bound carriageway only will be closed overnight for 15 nights from Tuesday, with diversions in place.

The work will return the M20 to its normal state for the first time since Operation Brock was introduced.

Under Operation Brock, one carriageway was to be reserved for HGVs heading to Dover, with all other traffic restricted to a contraflow system on the opposite side.

It was intended to deal with tailbacks caused by any customs delays experienced by hauliers in the event of a no-deal Brexit.

Highways England said work had been “carefully planned to limit any disruption,” with about 1,500 metres of barrier removed each night.

Ashford MP Damian Green said he was “delighted” the “wretched barriers” would be removed.

Operation Brock, installed in March, was stood down when Brexit was delayed last year, leaving coast-bound traffic free to use