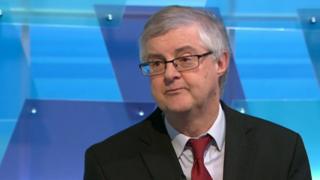 The first minister has said he does not plan to serve the whole of the next Senedd term if re-elected to the job in the 2021 election.

Mark Drakeford, 65, said he hoped to lead the Welsh Government “well into the next Senedd term”.

But he said around his 70th birthday would “be time for somebody else to have a chance to do this job”.

Mr Drakeford has been first minister since 2018 after taking over the role from Carwyn Jones.

The first minister told BBC Politics Wales it was his “plan from the very beginning” to step down at the milestone birthday.

But opposition parties said it was time for a change at next year’s election.

When he announced he was standing for the leadership of Welsh Labour in April 2018, Mr Drakeford said he would lead the party into an election.

If successful, he intended establish a government in the next term before standing aside for a “new generation of leaders to put themselves forward for election”.

Asked whether his plans had changed in light of his first two years as first minister being dominated by Brexit and the coronavirus pandemic, Mr Drakeford said: “My plan hasn’t changed from when I said it originally.

“My plan is, if I’m able to do it, I will lead the Labour Party in Wales into May’s election next year.

“If we’re successful I will form a government, I will serve as head of that government well in to the next Senedd term and then my plan will be to hand it on to somebody else in advance of an election.

“It will be time for somebody else to do this difficult and demanding job. As well as a job, it is a privilege to have had the opportunity to fill.”

‘The normal pattern of things in Wales’

Asked whether that would be an issue for people voting in the 2021 election, Mr Drakeford said: “Well, that’s what they would have done with Rhodri Morgan who stood in 2007 and then passed it on to Carwyn during that term.

“It’s what they would have done with Carwyn in 2016 who led us in to that election and then passed it on to me.

“So, this is the normal pattern of things here in Wales.”

Image caption Paul Davies was critical of Mark Drakeford when he was elected leader, saying he