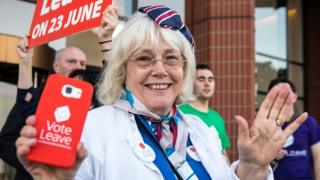 It used to be a fringe obsession ignored by the political mainstream.

So how did Euroscepticism conquer Britain?

The word “Eurosceptic” was not coined until the 1980s, to describe a rebellious band of Tory MPs, but hostility to closer European integration dates back decades.

Britain voted overwhelmingly to remain in the European Economic Community in 1975, but never joined the currency or the passport-free area, and a substantial body of public opinion had always believed the country was better off out.

They rarely had a voice at Westminster. The campaign to leave the European Union – via another referendum – took root outside of Parliament. It was pursued by mavericks, political outcasts and a fair few eccentrics.

It was a long, and often thankless, battle – and it began before Britain had even joined.

1961 – The birth of Euroscepticism

His, in the end unsuccessful, application to join the six nation European Economic Community enraged many in his party, who saw it as a betrayal of the Commonwealth nations, which were Britain’s biggest trading partners at the time.

Many in Labour viewed the EEC as a business-led Tory con trick. Both sides fretted about the loss of independence and status it would seem to entail.

Most opponents of membership tended to be on the far left and right fringes, but there were big, mainstream voices in both the Labour and Tory parties that were also firmly against it.

“I’m not very keen on the Common Market. After all, we beat Germany and we beat Italy and we saved France and Belgium and Holland. I never see why we should go crawling to them,” said former Labour Prime Minister Clement Attlee.

The first substantial campaign against British membership – The Anti-Common Market League – was formed in June 1961, by a bunch of disgruntled Conservatives.

It had broadened out into a cross-party effort by the following September, when it staged a mass anti-Common Market rally at London’s Albert Hall.

Euroscepticism has always attracted colourful characters. Major Oliver Smedley was a decorated World War II veteran and pirate radio entrepreneur, who was cleared of murder in 1966 after he shot a business rival in a dispute over a transmitter.