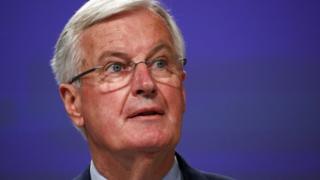 A “new dynamism” is needed in the next round of post-Brexit UK-EU trade talks if they are to avoid a “stalemate”, EU chief negotiator Michael Barnier says.

In a letter, he criticises the “tone” of his UK counterpart David Frost, but says talks could move forward with “constructive engagement by the UK”.

He was responding to a letter written by Mr Frost which was critical of the EU’s approach to the negotiations.

The two sides will meet for the fourth round of talks from 1 June.

The UK left the EU on 31 January, entering an 11-month transition period, where the country continues to follow a number of the bloc’s rules while negotiating a trade deal.

The government has repeatedly ruled out extending the transition period, and has said it will go onto trading with the EU on World Trade Organisation rules come 2021 if no agreement has been reached.

In a letter to Mr Barnier on Tuesday, Mr Frost said the EU’s proposed deal “contains novel and unbalanced proposals which would bind this country to EU law or standards”.

“What is on offer is not a fair free trade relationship between close economic partners, but a relatively low-quality trade agreement coming with unprecedented EU oversight of our laws and institutions,” he said.

In his reply, Mr Barnier said he did not think “an exchange of letters regarding the substance of the negotiations is necessarily the best way to discuss on substantial points”.

“It cannot be a substitute for serious engagement and detailed negotiations and, in particular, I would not like the tone that you have taken to impact the mutual trust and constructive attitude that is essential between us,” he said.

Mr Barnier said the UK “cannot expect high-quality access to the EU single market if it is not prepared to accept guarantees to ensure that competition remains open and fair”.

And he said there needed to be “tangible and parallel progress” made “across all areas of negotiations”, including on the level playing field, fisheries and the governance of the arrangements.

He said: “The next round must bring this new dynamism in order to avoid a stalemate.

“I remain convinced that with mutual respect and constructive engagement by the UK across the board, on all issues on the negotiating table, we can move forward in the limited available time.”