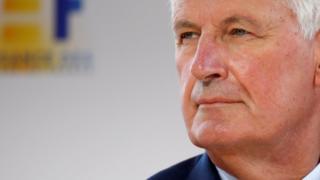 The EU’s chief negotiator says the UK will “have to move” if it wants a post-Brexit trade deal by the end of 2020.

Michel Barnier said he was “worried and disappointed” about the lack of concessions from his British counterpart, David Frost, after the pair met in London on Tuesday.

And he said the end of October was a “strict deadline” to finalise an agreement for next year.

The prime minister’s official spokesman said “major difficulties remain” between the two sides, but the UK government was keeping in close contact with the EU.

The UK left the EU on 31 January, but entered a transition period until 31 December while the two sides negotiate a trade agreement.

During this time, the UK continues to follow some of the bloc’s rules.

If a deal is not made and ratified by parliaments by the end of the year, the UK will go into 2021 trading with the bloc on World Trade Organisation rules – which critics fear could damage the economy.

But Boris Johnson has ruled out any extension to the end of the transition period, saying it was his priority to “get Brexit done”.