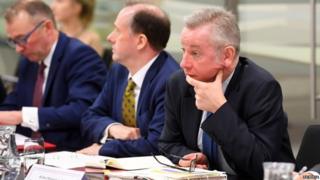 Ministers used a plane to fly from London to Cardiff for a meeting earlier this week – a 150 mile journey that takes less than two hours by train.

Former Environment Secretary Michael Gove was among those who made the journey from RAF Northolt to attend talks with devolved governments.

The government insisted that using the RAF plane was the most cost effective method available.

But opposition parties said ministers were out of touch.

The government has pledged to boost investment in greener forms of transport to help meet the UK’s target of net zero emissions by 2050.

Scottish Secretary Alister Jack was among the other senior ministers to catch a lift on the plane for the Joint Ministerial Council (JMC) meeting with the Scottish, Welsh and Northern Irish governments.

A return ticket by train from London to Cardiff is available from £50 online.

A government spokesperson said: “Six UK government ministers and their support staff travelled to Cardiff to attend the JMC as well as undertaking other official engagements. They travelled in the most efficient and cost effective manner.”