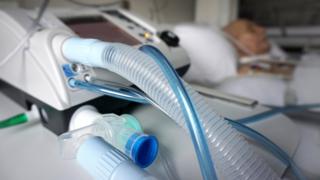 The government is facing a backlash from MPs for not joining an EU scheme to get extra ventilators during the coronavirus outbreak.

The bloc has said the UK can take part in the project, which will use the EU’s buying power to purchase more stock.

But a No 10 spokesman said the UK was “making [its] own efforts”.

The UK currently has 8,000 ventilators available and has placed orders for another 8,000 from existing manufacturers, but there are concerns about capacity in hospitals as the spread of the virus worsens.

Last week, the government put out a call for other British businesses to convert their factories to make the equipment, and has since signed a contract for 10,000 ventilators with Dyson.

But Boris Johnson’s spokesman confirmed the ventilators still needed to go through standards checks and would not be bought and distributed until that happened.

The EU scheme will use the bloc’s joint procurement agreement, which helps member states get the medical supplies it needs to tackle cross-border pandemics.

It has also created a stockpile of medical equipment – 90% of it financed by the European Commission – to help EU countries.

Last week, the UK was invited to take part in the scheme.

But Downing Street confirmed on Thursday it would not join as “we are no longer members of the EU”.

The spokesman added: “We are conducting our own work on ventilators and we’ve had a very strong response from business and we’ve also procured ventilators from the private sector in the UK and from international manufacturers.”

At today’s Downing Street briefing for political reporters, there were loads of questions about ventilators.

In short, how will the UK get a lot more, very quickly.

And in particular, why is the UK not part of an EU scheme to procure ventilators?

Because the UK is not in the EU, came the matter-of-fact answer from the Prime Minister’s Official Spokesman.

But the UK was invited to take part.

The government insists it is doing all that is necessary to get hold of more ventilators, including 10,000 from the vacuum cleaner maker Dyson.

But they will only be bought if they pass the necessary regulatory checks.