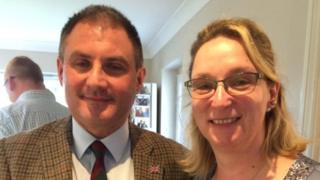 An MP has apologised to a former employee after she complained about being bullied and harassed by him.

Jo Kinsey worked for Jack Lopresti, Conservative MP for Filton and Bradley Stoke, after the Brexit vote. She then complained to the party about him.

She said she felt vindicated and relieved, but has resigned as a Conservative member over the process.

Mr Lopresti said he categorically rejected the allegations, and had concerns about the inquiry process.

He said his apology for his actions, however inadvertent, was the end of the matter and that he had attempted to resolve the issues at the time.

Mrs Kinsey had known Mr Lopresti since they were Young Conservatives together.

But she said his behaviour changed when she started working for him in 2016. She claimed he used abusive and obscene language.

“He would shout. He’d be volatile,” she told the BBC.

“I explained how it made me feel and unfortunately he banged his hand down on the desk, slammed his Filofax shut, and just shouted at me, saying ‘this meeting is over’ and just left.”

After complaining to her local party, Parliamentary HR and a whip, Mrs Kinsey resigned from her job and formally complained to Party HQ.

They convened a panel to consider her 240 page dossier, and found he