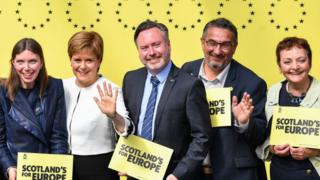 A new MEP has been confirmed to represent Scotland in the European Parliament – four days before the UK leaves the EU.

Heather Anderson has taken up the SNP seat vacated by Alyn Smith, who became an MP in December’s general election.

She will be in Brussels to vote on the withdrawal agreement on Wednesday, before leaving again on Friday with the rest of the UK’s representatives.

Ms Anderson will not be eligible for any payoff or pension for the role.

Scotland has six MEPs in the European Parliament, following the election in May 2019 – three of them SNP, with the Conservatives, Lib Dems and Brexit Party winning one seat each.

After Mr Smyth transferred to We