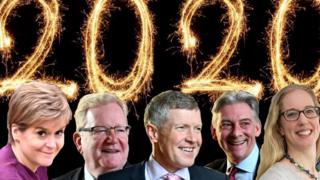 Nicola Sturgeon has said Scotland will be at the “centre of international attention” in 2020 in her New Year message.

The first minister led Scotland’s party leaders in issuing her hopes for 2020.

Jackson Carlaw, the Scottish Conservatives leader, was optimistic about Britain leaving the EU.

Scottish Liberal Democrat leader Willie Rennie said Brexit and Donald Trump were some of the biggest challenges facing the UK over the next year.

Scottish Secretary Alister Jack looked ahead to delivering a Brexit for Scottish farmers, fishermen and businesses, while Scottish Labour’s Richard Leonard spoke of the climate emergency and tackling poverty.

Ms Sturgeon’s message highlighted the UN climate change summit in Glasgow in November as a key date for the year ahead, which she said would give Scotland the chance to show it is leading by example.

Addressing the UK’s scheduled exit from the EU in January, the SNP leader sought to reassure EU citizens and said the Scottish government would work towards giving people the opportunity to “determine Scotland’s future”.

“As we celebrate the start of 2020 and a new decade, we look forward to a year in which Scotland will be at the centre of international attention,” she said.

“In November, the United Nations climate change summit in Glasgow will attract more than 30,000 people from around the world.

“Hopefully that summit will lead to progress in tackling the most important issue that the world faces.

“And it will give Scotland a chance to show that we are leading by example – not just by reducing our greenhouse gas emissions but by doing so in a way that helps to build a fairer, healthier and happier society.”

The first minister added: “The Glasgow summit comes near the end of what will be a historic year.

“Against the wishes of most people in Scotland, we will leave the European Union at the end of January. That will, I know, be a source of deep regret for many of us.

“In the year ahead, the Scottish government will do everything we can to mitigate the worst impacts of Brexit.

“We will provide support and reassurance for the EU citizens who have done us the honour of choosing to make Scotland their home.

“And we will work to ensure that people in Scotland have the chance to determine our own future – by deciding whether we wish to become an independent country.