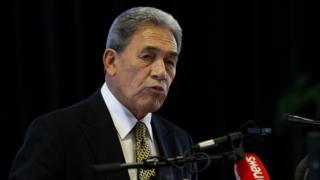 New Zealand is “very frustrated” with the pace of post-Brexit trade talks with the UK, the country’s deputy prime minister has said.

Winston Peters said the UK’s EU membership had not left it “match fit” to negotiate its own agreements around the world.

The UK opened trade talks with New Zealand in July, but will not be able to sign a deal until next year.

The government said talks on a deal had been “positive and productive” so far.

Speaking to Times Radio, Mr Peters said the “prescription” for an agreement “could have been already virtually signed up to”.

Asked what New Zealand offered the UK as a trading partner, he replied: “We offer first of all a country that is match fit for trade deals.”

“We are seriously match fit for that in a way I don’t think the UK is, because the UK’s been locked up in the EU all these years,” he added.

“It’s like coming into an Ashes contest when you haven’t played for thirty years”.

“We believe we’re totally match fit and ready to go – we just need the British to realise that you can do more than one trade deal at a time.”

The UK is currently unable to complete its own trade agreements during the 11-month transition period following its exit from the EU in January.

However alongside talks on a trade agreement with the EU, it has opened trade talks with a number of countries outside the bloc.

While it was an EU member, the UK was automatically part of around 40 trade deals which the EU had struck with more than 70 countries.

So far, the UK has agreed terms for 20 of these existing deals, covering 50 countries or territories and mostly with smaller trade partners, to be rolled over.

The UK says it hopes to agree a deal to replace the EU’s existing agreement with Japan,