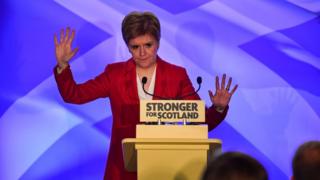 Scrapping Trident would be one of the SNP’s key demands to gain its support in the event of a minority Labour government, says Nicola Sturgeon.

The SNP is willing to support a Labour government if no party wins an overall majority – but the SNP leader has ruled out a formal coalition.

Ms Sturgeon also wants Labour to stop Brexit and commit to an independence referendum next year.

The Labour manifesto includes a pledge to renew the Trident nuclear deterrent.

Ms Sturgeon was asked by Sky’s Sophie Ridge if scrapping Trident would be a red line for the SNP to support Labour. She replied “Yes”, adding that the SNP would be “absolutely firm” on that.

The SNP leader continued: “I have a moral objection to weapons of mass destruction… I wouldn’t be prepared to press a nuclear button that would kill potentially millions, tens of millions, of people.

“But there’s also the opportunity costs of Trident – the billions, tens of billions, that are required to renew Trident in my view are better spent on stronger, conventional defence that is more effective to protect our country but also hospitals and schools and better social security provision.

“And these are the choices that we should be thinking very carefully about.”

Ms Sturgeon said that in the event of a hung parliament, where no party had an overall majority and the SNP held the balance of power, Scotland would have “maximum influence”, adding: “That would be a pretty good outcome I think in terms of making sure Scotland’s voice is heard.”

She reiterated that there would be no coalition with Labour, saying instead SNP support would be “less formal” – such as a confidence and supply arrangement, where the SNP would support a Labour government on explicit votes in return for government support of specific policies. Nicola Sturgeon

“Other matters” that she would want to progress would include holding an independence referendum next year, stopping Brexit, devolving control of migration, employment and drugs classification laws to Holyrood and a “real end to austerity” and “to the misery of Universal Credit and welfare cuts”.

She insisted these issues would “resonate strongly with many people across the UK”, as well as her supporters in Scotland.

She added that she would “never,