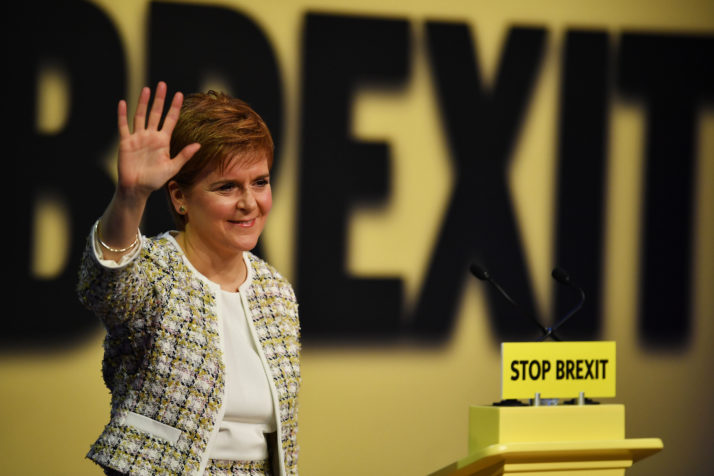 SNP demands second Scottish independence referendum next year and extra funding for Scotland in exchange for support in Westminster.

LONDON — The Scottish National Party is prepared to form a “progressive alliance” that keeps the Conservatives out of office, its leader Nicola Sturgeon said today.

Launching the party’s manifesto in Glasgow, Sturgeon pitched the SNP as the only kingmaker party that would keep the Tories out of Downing Street following the U.K.’s December election.

If there is a hung parliament, the SNP is willing to support Labour in exchange for a referendum on Scottish independence next year. Labour leader Jeremy Corbyn said last week that a second ballot would not be a priority for at least the first two or three years of a Labour government.

Sturgeon would also push for a funding plan for Scotland covering three core demands. First, reversing £1.5 billion cuts to the Scottish budget and increasing the budget in real terms; second, a plan to compensate for the last decade of austerity; and third, a demand for the U.K. government to increase per-head NHS funding south of the border to levels seen in Scotland, which it says is currently £136 per person higher. This increase in health spending in England would result in additional money for the Scottish NHS under the Barnett formula,