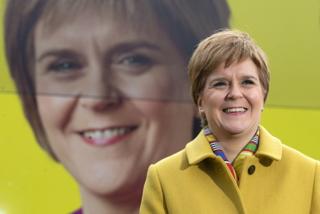 The “contemptuous way in which Scotland has been treated” is justification for a new vote on independence regardless of Brexit, Nicola Sturgeon has said.

The first minister has put a referendum at the heart of the SNP’s campaign for the general election on 12 December.

She told BBC Radio Scotland that a ballot should be held even if the UK ultimately does not leave the EU.

And she said the country’s “interests, voice and views” had been “ignored” over the past three years.

The SNP leader was the latest Scottish party leader to take part in a live BBC Radio Good Morning Scotland interview in the build-up to Thursday’s snap election.

The other main parties are all opposed to independence, and have said they would not agree to a vote on Ms Sturgeon’s preferred timetable of the second half of 2020.

The SNP’s campaign is based on both opposing Brexit and pursuing a fresh referendum on Scottish independence.

Asked if the UK remaining in the EU would derail her hopes for an independence vote, Ms Sturgeon said this was not the case.

She said: “My manifesto in 2016 said a material change in circumstances such as – for example – Brexit.

“The material change, yes, is the prospect of Scotland being taken out of the EU, but also the contemptuous way in which Scotland has been treated, with our interests, our voice, our views ignored. We’ve seen that in spades over the past three years.

“I’ve been very clear in this election, I think that it’s right for Scotland to have a choice over our own future. Whatever that choice happens to be its up to people in Scotland if its independence or not, that ability to choose is far preferable to having that choice made for us by a Westminster government, particularly one led by Boris Johnson.”

Ms Sturgeon has said she will approach the UK government for an agreement to hold a referendum – similar to that which underpinned the 2014 vote – by the end of 2019.

The Scottish Parliament is also set to pass legislation before Christmas which could pave the way for a vote.

The SNP leader said: “I’ve been crystal clear – and this is sometimes a hard thing for my own supporters to hear –