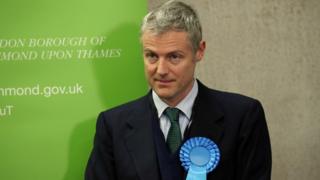 Downing Street has dismissed allegations of “cronyism” after ex-MP Zac Goldsmith was made a peer so he could keep his government job.

He lost his seat of Richmond Park, London, in last week’s election, but will remain an environment minister.

Number 10 refused to comment on a tweet Mr Goldsmith wrote in 2012 describing the peerage system as “seedy lists of party apparatchiks”.

Labour said Boris Johnson was using the Lords to appoint “jobs for mates”.

Members of the government must belong to one of the Houses of Parliament.

Mr Goldsmith’s appointment comes after Nicky Morgan was given a peerage so she could remain as culture secretary, despite standing down as an MP.

Seedy lists of party apparatchiks appointed by power hungry party leaders & insulated from any democratic pressure for 15 yrs? No thanks.

Shadow culture minister Jon Trickett accused the government of “cronyism”. “It says everything you need to know about Boris Johnson’s respect for democracy that he has ignored the voters of Richmond Park and appointed Goldsmith to government,” he said.

“It is the first days of Parliament returning and already Boris Johnson is rewarding his cronies with peerages,” she said.

Asked about the criticism of Mr Goldsmith’s appointment, a Downing Street spokesman said: “Zac Goldsmith was doing an excellent and committed job in cabi