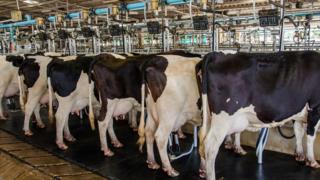 The Ulster Farmers’ Union (UFU) has rejected claims that 45,000 dairy cows will be culled in Northern Ireland as part of a no-deal Brexit.

BBC Newsnight reported that senior industry figures believe cows could be culled in the event of a no-deal Brexit, if new higher tariffs are applied to British milk.

He told BBC Radio Ulster’s Stephen Nolan Show that the figure of 45,000 cows appeared to have been “plucked out of the air”.

About 800 million litres of milk are processed in the Republic of Ireland from Northern Ireland each year.

According to BBC Newsnight, the fear among producers in Northern Ireland is that, if no agreement is reached and traditional trading relationships with the south become difficult, the country will be left with a glut of milk that it will not be able to process or sell.