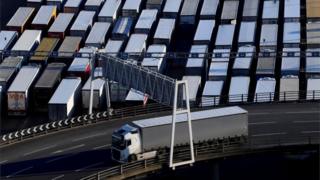 A secret dossier warning of the impact of a no-deal Brexit outlines a “worst-case scenario”, Michael Gove has said.

Details from the cross-government study, leaked to the Sunday Times, warns of food and medicine shortages if the UK leaves the EU without a deal.

Mr Gove, who is responsible for no deal preparation, said “very significant steps” had been taken to boost Brexit planning since Boris Johnson became PM.

The leak comes as Mr Johnson is to meet European leaders later this week.

The prime minister will insist there must be a new Brexit deal when he holds talks with German Chancellor Angela Merkel and French President Emmanuel Macron.

According to Operation Yellowhammer, the cross-government study of the impact of a no-deal Brexit, the UK could face months of disruption at its ports.

And plans to avoid a hard border between Northern Ireland and the Irish Republic are unlikely to prove sustainable, it adds.

The dossier says leaving the EU without a deal could lead to:

A No 10 source told the BBC the dossier had been leaked by a former minister in an attempt to influence discussions with EU leaders.

They added that the document “is from when ministers were blocking what needed to be done to get ready to leave and the funds were not available”.

Responding to the leak, Mr Gove tweeted: “We don’t normally comment on leaks – but a few facts – Yellowhammer is a worst case scenario – v significant steps have been taken in the last three weeks to accelerate Brexit planning.”

Business minister Kwasi Kwarteng told Sky News’ Sophy Ridge on Sunday: “I think there’s a lot of scaremongering around and a lot of people are playing into project fear.”