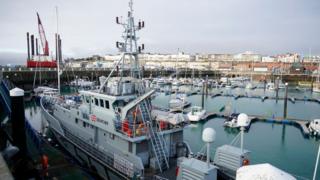 Concerns have been raised over the readiness of a British firm contracted by the government to run extra ferries in the event of a no-deal Brexit.

Seaborne Freight was awarded a £13.8m contract this week to run a freight service between Ramsgate and Ostend.

The firm has never run a ferry service and a local councillor said it would be impossible to launch before Brexit.

The government said it had awarded the contract in “the full knowledge that Seaborne is a new shipping provider”.

The Department for Transport said that “the extra capacity and vessels would be provided as part of its first services”.

“As with all contracts, we carefully vetted the company’s commercial, technical and financial position in detail before making the award,” it added.

Conservative Kent county councillor Paul Messenger said it was impossible for the government to have carried out sufficient checks on the firm.

“It has no ships and no trading history so how can due diligence be done?” he asked.

Mr Messenger said he didn’t believe that it was possible to set up a new ferry service between Ramsgate and Ostend by 29 March – the date when the UK is due to leave the European Union.

The narrow berths for ships at the Port of Ramsgate mean there are only a few suitable commercial vessels, most of which are currently already in service, he said.

Ferry services have not operated from Ramsgate Port since 2013 after cross-channel operator TransEuropa collapsed, owing around £3.3m to Thanet District Council.

Mr Messenger said he was “perplexed” at the choice of Seaborne Freight to run the service.

“Why choose a company that never moved a single truck in their entire history and give them £14m? I don’t understand the logic of that,” he said.

But Seaborne Freight, which was formed less than two years ago to revive the Ramsgate-Ostend line, insisted it will launch its freight service between Ramsgate and Ostend before 29 March.

He declined to give details on which ships it planned to use for the service, saying the information was commercially sensitive, but said they planned to start operations with two ships before “very quickly”