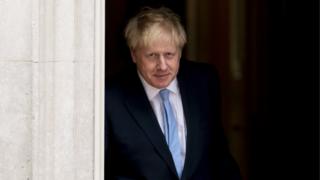 Preparing for the possibility of a no-deal Brexit should be “the top priority” for civil servants, Boris Johnson has told them in a letter.

The PM said he would prefer to get a deal with the EU, but he said he recognised this “may not happen”.

Earlier Jeremy Corbyn had urged the UK’s top civil servant to intervene to prevent a no-deal Brexit happening during a general election campaign.

It comes amid speculation MPs could back a no-confidence motion in the PM.

In his letter to civil servants, Mr Johnson said the UK must be prepared to leave the EU by the latest Brexit deadline of 31 October “whatever the circumstances”.

“That is why preparing urgently and rapidly for the possibility of an exit without a deal will be my top priority, and it will be the top priority for the civil service too.”

It is understood that government special advisers also received an email last night from the PM’s senior adviser Eddie Lister instructing them not to take annual leave until after 31 October.

Mr Javid also ordered the tax authority to make preparing for no-deal its “absolute top priority”, including helping the public to prepare for the possibility.

He said this should include making sure IT systems are ready, helping businesses with a helpline, and contacting traders directly.

In his letter to Cabinet Secretary Sir Mark Sedwill, Mr Corbyn said it would be an “anti-democratic abuse of power” if the PM allowed a no-deal to occur by default during a general election campaign, if the government was defeated in a vote of no confidence.

Shadow chancellor John McDonnell has said it is “almost inevitable” that Labour would push for such a vote when the Commons returns from its summer recess on 3 September.

It is thought MPs opposed to no-deal could back the vote in a bid to prevent the UK leaving the EU without an agreement – leading to a general election being called.

Election rules say Parliament should be dissolved 25 working days before polling day – so some people are concerned Mr Johnson could allow a no-deal Brexit to happen while MPs are not sitting.

According to the Sunday Telegraph, Mr Johnson’s senior adviser at No 10, Dominic Cummings, has told MPs even losing such a vote could not stop the PM taking the UK out of the EU on 31 October.