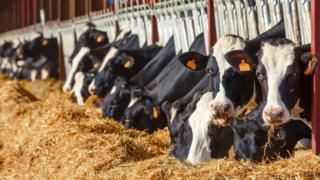 Some 45,000 dairy cows could be culled in Northern Ireland, in the event of a no-deal Brexit if new higher tariffs are applied to British milk, senior industry figures have warned.

Northern Ireland is particularly vulnerable because about a third of its dairy output is processed in the Republic of Ireland, which would continue to be part of the EU.

The UK is due to leave the EU on 31 October and one source said the culling of cattle could start within weeks of that date if that happened without the UK and EU agreeing a deal.

BBC Newsnight has been told that officials and ministers from the Department for the Environment, Farming and Rural Affairs (Defra), have been warned about the potential for a “major cull of dairy cattle, but they are not listening”.

In a statement Defra said: “A widespread cull of livestock is absolutely not something that the government anticipates nor is planning for in the event of no-deal.

“We will always back Britain and Northern Ireland’s great farmers and make sure that Brexit works for them.

“The government is boosting its preparations to ensure we are fully prepared to leave the EU on 31 October, whatever the circumstances.”

But another industry insider told Newsnight that despite their warnings there had been a “metaphorical shrug of the shoulders from ministers”.

It comes after reports on Monday that the prime minister’s de facto chief of staff, Dominic Cummings had said all government departments should be “interrogated” on Brexit planning and raise any issues with No 10 as soon as possible.

There are approximately 310,700 dairy cattle in Northern Ireland, and the industry exports between 700 and 800 million litres of milk to the Republic of Ireland each year.

At present the average trade price of a litre of British milk is 26p. In the event of a no-deal Brexit, where 19p tariffs could be applied, that price would be pushed up to 45p in the Republic.

However, the concerns are not solely based on the introduction of tariffs, which would make British milk expensive.

Customs checks and paperwork relating to traceability and standards could add further complications, and crucially it may no longer be legal to mix milk from the north and south.

The fear among producers in Northern Ireland is that, if no agreement is reached and traditional trading relationships with the south become difficult,